The Beagle is a sporty, happy and independent dog. He is social, affectionate and quirky. It is a real hunting dog and he prefers to get his nose to the ground. Beagles can hardly stand to be alone and can then make their loud voices heard. The Beagle suits an active, consistent and patient owner who wants to do a lot with his dog and does not have to leave him alone for long. 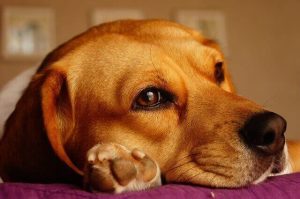 Traits
Character
History
Care: watch out with food
Diseases and hereditary disorders
Does a Basset hound suit me?
Education with consequence and patience
This is how you find your dream basset hound

The Beagle Hound belongs to the Breed group “Running dogs – sweat dogs and related breeds”, with the following traits:

A Beagle knows what he wants. He owes his good sense of smell and his speed to his heritage as a hunting dog. The breed therefore has a strong hunting instinct – so many Beagles disappear far into the woods reacting to a hare, despite the cries of their boss. These cunning dogs may look innocent, but they still need a strong hand. Anyone who does not make his Beagle clear from the start who is the boss must take into account that his dog is pulling the strings. In the worst sense of the word … The dog, originally used as a hunting dog, energetically pursues its purpose, both during a walk in the woods and during daily life.

As a hunting dog, the Beagle is cozy, and can be well accompanied by fellow dogs of any breed, age or size. When living with other dogs, it is even more important to set boundaries and to properly and consistently raise the Beagle and its counterparts. If this is not done correctly, the Beagle will play the role of alpha dog and turn your entire house upside down. One of his characteristics as a hunting dog is certainly his insatiability of a Beagle knows no limits and does not even stop with unhealthy or dangerous food, such as Christmas chocolates …

Intelligent dogs such as the Beagle need activity. He likes Beagles intelligent games, but also agility or long walks with his owners. The most important thing is that there is something to do! The Beagle likes to be everywhere and therefore fits perfectly with active people. In lively families, possibly with children, he feels particularly good!

It cannot be emphasized enough: a Beagle may look cuddly, but they are intelligent, self-aware dogs that need a hard hand. Consequence is fundamental to living with a Beagle. A Beagle is not refusal or untraceable, but they know what they want and can be very dominant if they don’t consider their owners the alpha. Don’t let yourself be surrendered by the pleasing gaze with their shiny dog ​​eyes, so let your Beagle know who’s in charge. As intelligent animals, the Beagles are willing to learn, and consequently become good four-legged comrades!

History of the Beagle

The Beagle is one of the smallest running dogs. In 1475 the Beagle is already mentioned in writing. The breed has long served as a hunting dog for haze hunting on foot. With this hunting species they needed a lower and less fast dog. The Beagle approaches the Foxhound in miniature edition. They are attractive dogs, but you must take his hunting passion into account. The socialization phase (which already starts with the breeder) is very important for this breed, so that a good bond with the boss is established who will eventually have to win his hunting passion on the field, otherwise the dog will roam.

Breeding goes back to the so-called Humbertus dog or Northern dog, which the Normans brought with them in the conquest of Britain in 1066. Around 1400, the Beagle was crossed with the spotted Southern Hound from southern France. For the original breeders, the past as a hunting dog and the uses for hunting were important. The name “Beagle” appeared around 1515 in the household books of King Henry VIII. In the year 1615 a small dog breed called “Little Beagle” is mentioned for the first time, which fits into the bags of the hunters because of its small size. These excellent hunting dogs are attributed a good hunting instruction, the term “beagling” means a hunting with the support of a group of dogs. Nevertheless, the Beagle was first recognized in 1890 by the “British Kennel Club”.

Care: Watch out with too much food

The fur of the Beagle needs little care, occasional brushing is sufficient. Keep in mind that the short hairs he loses are difficult to get from upholstery and other textiles.

Regularly check the nails, view the teeth and check the eyes. Check the ears for dirt and things like grass spikes, especially if your dog has walked through vegetation.

Beagles are predisposed to being overweight, which makes them slow and sometimes moody. They like to eat, also from the street. So make sure that your dog does not get too fat and weigh it regularly.

If your Beagle becomes sluggish or moody at a later age, have it checked if this is not due to pain in his neck and back.

In addition to this condition, there are other hereditary disorders that, according to research, can be important for this breed, namely:

Does a Beagle hound suit me?

To keep a Beagle responsibly, it is nice to have experience with keeping dogs. This breed is not easily educable, so deepen your knowledge of dog behavior so that you can prevent the development of unwanted behavior as much as possible. Make sure you inform yourself well in advance, for example through the breed club.

Education with consequence and patience

Since the Beagle is naturally somewhat stubborn, it is recommended that you go to obedience training with your Beagle puppy. After a few lessons you have an obedient and very affectionate dog.

This is how you find your dream Beagle hound

Although the Beagle was originally bred in Great Britain, targeted breeding has also taken place in Germany. Beagle breeders can register with various purebred dog associations throughout Germany.

You may think that a family dog ​​does not need documents, but you should never trust an unreliable breeder who offers “purebred dogs without documents”. Animal breeding is a time-consuming and expensive hobby. Breeders must not only feed the animals until they go to another house and let the animal socialize, but are also responsible for the gene pool of the breed. This is not only about the external appearance, but also about the health of the animals. Breeding associations not only monitor the living conditions of the animals, but also ensure that they are intentionally paired. In addition, unreliable breeders often use related animals, which increases the risk of hereditary diseases … Puppies from such an unreliable litter are usually neither socialized nor vaccinated, which means they can suffer from hereditary diseases at an early age.

A reliable breeder, on the other hand, can provide information about the parents of your future pet – even with medical reports when you ask. Caring for a litter is expensive, so don’t be surprised if the reliable breeder only offers two litters per year, the selection of which is very small. In addition, the Beagle mother must also be able to recover after a litter. After eight to ten weeks the puppies are ready for a new house.

Purebred dogs are expensive but are worth their money!

An alternative is the animal shelter, where many dogs are waiting for a good house – including many Beagles! Animal shelter staff can generally provide you with detailed information about the character and history of the dog. Adult dogs may not be as cute as puppies, but offering a good new home to an adult Beagle can also be very rewarding! They will give you and your family a lot of joy and will enrich your life with their sunny characters and their curious personality.